What is the cell cycle?

The 'cell cycle' is a way to describe the life of a eukaryotic cell. The cell cycle can be divided into three main stages: Interphase, Mitosis, Cytokinesis. Interphase and mitosis can each be subdivided into smaller stages as shown below.

Interphase - during interphase cells are performing their normal duties and potentially preparing to divide. Interphase can be subdivided into 4 stages.


Mitosis - is the stage of the cell cycle where the cell appropriately segregates the DNA to the two sides of the cell before it pinches in half to form two new cells that are identical to each other and to the original parent cell. Mitosis is divided into 4 stages.


Cytokinesis - is the division of the cell cytoplasm. This is when the parent cell splits in half to form two new cells. 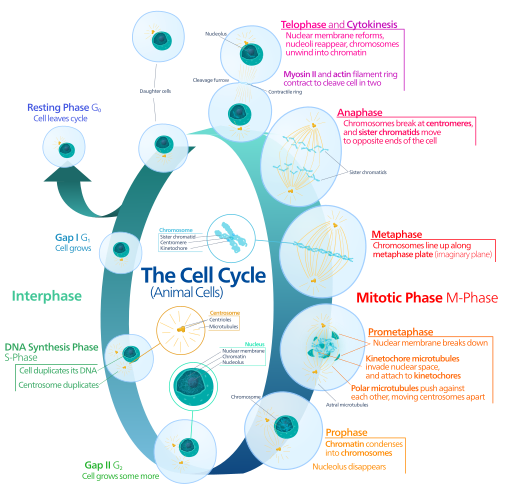 Image by Kelvinsong, from Wikimedia Commons